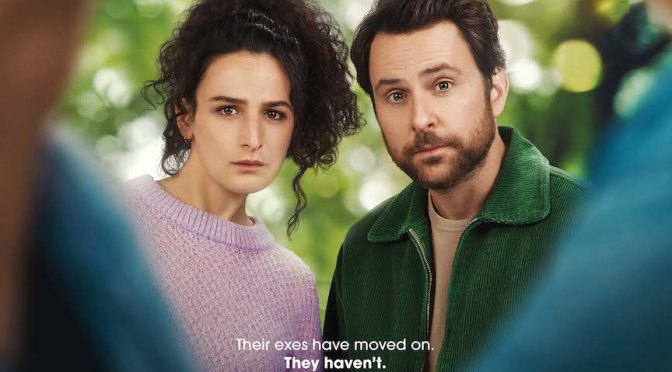 It’s uniqueness that makes the Amazon Prime original I Want You Back stand apart from normal romcoms. Sure, we’ve seen exes plot their beloved’s returns (or demises), but it’s not often we see it done with such heart and relatability.

The film follows Peter (Charlie Day) and Emma (Jenny Slate) as they navigate through the five stages of heartbreak. Peter was in a six-year relationship with Anne (Gina Rodriguez) who leaves him for the more adventurous (and more lusciously locked) Logan (Manny Jacinto), a drama teacher at her school. Emma gets dumped over a brunch of steak and “lovers punch”. She feels that punch when her long-term boyfriend (18 months!) Noah (Scott Eastwood) trades her in for a more ambitious model (and baker and entrepreneur) Ginny (Clark Backo).

Rounding out the cast is the always wonderful Dylan Gelula as Lisa, Emma’s roommate, and Mason Gooding as Paul, Lisa’s boyfriend. Both are pre-law and show a lot more maturity than Emma who feels aimless in the world. Emma’s brand is if “just figuring it all out” were a person.

Another thing that works in the film’s favor is the effortless diversity. I’m always on the lookout for casts that are inclusive and representational. We meet Anne as she’s at a birthday party for her nephew. During the party, they sing Feliz Cumpleaños a Ti! and Peter fits right in. He’s not a fish out of water, he’s a part of the family, despite the fact that Anne is about to leave him. Backo’s character, Ginny is gorgeous and business-minded and not just a brainless thot. She’s a Black female character and not just what used to happen when Black people were on Gossip Girl.

Logan is deliciously continental and his lack of real culture actually informs his character nicely. The film does a great job of weaving diversity in seamlessly. It’s nice to see people of color integrated into rom-coms and in a way that isn’t purely secondary or used solely as support to the white characters. Both Ginny, Anne, and even Logan have their own personalities (or lack thereof in one character’s case), their own ambitions, and their own support systems. It’s done well and could serve as a template for future productions.

Overall, I Want You Back is well worth the stream. It’s a movie that celebrates people and love and finally answers the question of what happens to a broken heart. I Want You Back premieres Friday, February 1tth on Amazon Prime.